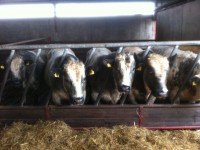 The following Financial Times article highlights the challenges that we face on a day to day basis to get the best value for our customers. With Soya prices continuing to rise and bringing the price of feed protein up with it, we at O’Connell Milling are working hard sourcing quality raw materials from across the globe in order to maintain the high quality of our feeds at a price that offers value to our customers.
Call us today for your Animal Nutrition needs. From our range of tried and tested Dairy and Beef feed to one off special formulations, we have something to suit everyone.

By Emiko Terazono in London, Gregory Meyer in New York and Benedict Mander in Buenos Aires,

“Pesos are no use – the worst thing you can do is hold pesos.”

Alfredo Rodes, executive president of farm association Carbap in Buenos Aires province, speaks for many of Argentina’s soya farmers who have turned their backs on the local currency.

Faced with a sharp fall in the peso as emerging markets are battered amid concerns over the fallout of central banks’ unwinding of monetary stimulus the country’s soyabean growers have packed their dollar-denominated crop into “silo bags” rather than sell it for cash, determined to hold on to it as long as possible.

A new harvest is now set to start in April. With Argentina accounting for about a tenth of the world’s soyabean exports and almost half the soyameal trade, farmers’ decisions on whether to keep hoarding will ripple through global futures markets.

Farmers “see their crop as a protection of value against the potential devaluation. So we’re monitoring much more that impact,” Juan Luciano, chief operating officer at Archer Daniels Midland, the agricultural trading house and processor, told analysts last week.

The decline in sales volumes by farmers initially hit the market at the start of last year, as concerns about peso devaluation and rising inflation deepened. Soyameal prices remained firm on the “selling strike” while the lack of soyabeans affected global companies such as ADM and rivals Bunge, Cargill and Glencore.

The latest currency turmoil has sent the price of soyabeans up more than 20 per cent in peso terms since the start of the year. By contrast, Chicago soyabean futures – traded in dollars – are up 1.6 per cent at $13.33 per bushel.

But with further devaluation fears and Argentina’s inflation rate almost 30 per cent, analysts do not expect farmers to liquidate their bean piles.

“Unless a mechanism becomes available for producers to convert soybeans into assets that can retain their value in the current inflationary environment, limited producer selling is likely to continue,” the US Department of Agriculture says.

Argentine growers have only sold 6 per cent of their soyabean crop to crushing plants and exporters, according to the latest figures from Macquarie. This compares with 11 per cent at the same time last year, and 25 per cent for the year before that.

Soyabean inventories left over from last year’s crop in Argentina will total a record 9m tonnes before this year’s harvest, almost doubling annually, the USDA estimates.

“This is usually the time of the year where the crop has mostly been sold and there is almost no stock left,” says Paula Savanti, analyst at Rabobank in Buenos Aires.

Unlike counterparts in other countries who are forced to sell harvests quickly to big agribusinesses, many Argentine farmers’ access to the low-cost, high-tech silo bags gives them freedom to store and sell their soya when they want.

Alejandro Quentin, chief executive of Pampa Capital Management, an agribusiness investment group, says Argentina’s farmers “are very independent and do not need to [use] expensive infrastructure to store crops” thanks to the bags.

While processors and the big soyameal buyers will be watching and waiting for the soya to flow, analysts believe that unless the currency and inflation rates change in Argentina, farmers will behave similarly to last year.

Chris Gadd at Macquarie in London believes that while farmers will come to the market once the harvest starts in April, to raise cash to pay for seeds and fertilisers, the flow will slow during June and August, just before the US soyabean harvest.

“Under this scenario, we would expect the world’s meal consumers to have as large a challenge in securing meal as they did in the June-
August period last season,” says Mr Gadd, adding that “it will be a hand-to-mouth situation”.

Stocks of soyabeans in the US – which, with Brazil and Argentina, is one of the top exporters – will shrink to the equivalent of 4.5 per cent of annual consumption by late August, just as low as in 2013, USDA forecast Monday.

The tense relationship between Argentina’s farmers and the government may worsen over the next few months if, as expected, Buenos Aires pressures farmers to sell their crops to help generate revenues in foreign currencies.

Hector Huergo, an agricultural engineer who formerly headed the National Institute for Agricultural Technology, ridicules the government’s attacks on farmers for hoarding their stocks. “If I have a fridge full of beer, I’m not hoarding if I don’t drink it all at once – I drink it as and when I’m thirsty,” he says.