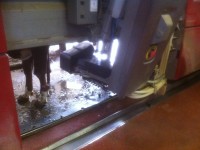 I recently had the opportunity to visit a Dutch dairy farm. I found it quite eye opening to see how the Dutch method of Dairying compares with the Irish method.

The first thing that strikes anyone visiting rural Holland is the lack of cows in the fields. The land there is very well drained and the control of water is vital to Dutch agriculture. They need to drain the land and also in summer use water for irrigation.
The fields are very well kept, no visible weed population, no poaching, no unproductive barren areas and every square inch of land is used.
About 50% of the land is taken up with maize silage, 40% with grass silage and some red clover silage fields.
Land is very expensive in the Netherlands costing about €90,000 per hectare in the area we were in, consequently it is fascinating to see how much the Dutch really appreciate it.
The dairy farm we visited appeared to be a typical Dutch farm. The farm yard is situated right beside the road, and consists of a large concrete yard with the sheds and silage pits.
All the Dutch farms are kept very clean, large concrete yards, no rubbish, no old machinery lying around, no evidence of what we would consider typical farm conditions here in Ireland!
The farm we visited was a 160 cow farm running on 62 hectares. The main cow shed was built new in 2010 and was bright, clean and very well ventilated. The herd of cows were very clean, no dirty marks on them and were one of the most content looking herds I have ever seen.

The first thing we asked the farmer was how long did he spend milking his 160 cows and his farm work in general. The answer was ” maybe an hour a day sometimes an hour more but mostly an hour a day”. He achieves this by employing 4 robot milking machines to carry out the milking for him. His shed is separated into 4 sections each served by a LELY robot milking machine. The cows enter the robot when they are due to be milked and the robot dispenses their compound feed and milks the cows 3 times a day. Each cow has an individual band that lets the robot know who she is, if she is due to be milked and records how much milk she produced and a rough idea of the cell count of each cows milk is recorded. Interestingly his herd is being built up to 200 cows and on average are only on their third lactation so these young cows are working well on the robots.
It is the farmers job every day to walk through the cows once in the morning and once in the evening and check the robots records. If a cow has missed a milking or is significantly down on production the robot will alert the farmer.
His most time consuming job each day is to fill the diet wagon and feed them each day. He also has a LELY feed robot that pushes in the feed to the cows every couple of hours. The feeding space where the silage sits is tiled to enable it to be cleaned properly.

The next question was how much did all this cost? The new shed, milk storage system, feeding system, 2 robot scrapers, feed robot and 4 milking robots cost nearly 1 million euro for the 160 cow herd.
The robot milking machines cost around €100,000 each. He had recently sold 2 of his older 6  year old robots for €60,000 each when he built this new shed.
Its a huge outlay of money but it allows him to milk very consistently with ease. The cows are used to the system and are very easy to manage as they are on a consistent diet at all times. They do not have the burden that we ask of our cows of changing diet from silage to fresh grass overnight and have the challenges of being outside in the cold and wet day and inside by night and often in tough grazing conditions.
This farmer has 62 hectares of land to grow his fodder for the year so he grows a crop of 40 hectares of maize silage and 6 crops of grass silage from 22 hectares.
He owns only 2 tractors, and a loading shovel. All other work is done by contractor and that is typical of the Dutch system.
The economics of the indoor diet are fully dependent on what his input costs are. He can buy Sugar beet at 25% moisture at a relatively cheap cost from Germany and Poland which he puts into a pit. He has to pay to get rid of his Manure as he cannot spread it all on his land so 4 loads a week go to France or Germany to be spread in the vineyards or on arable land.
When we were talking to this farmer he is quite envious of the Irish dairy system in a lot of ways. Our land prices are far cheaper and we have a great ability to grow grass all year round. His biggest fear is the milk price relative to the input prices. He made a very good point that Milk price is not really that important, it is the margin between what you sell and what it costs you to produce that is important. It is no good having record high milk prices if input costs are also very high.
His plan to offset lower milk prices is to put aside €1000 per cow for the inevitable years where his margin is under pressure.
All in all it was fascinating to see this system in operation first hand. Surely there is some parts of this system that we could incorporate into our Irish systems to make our jobs easier and more productive.