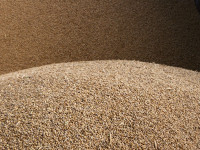 It may sound like a simple thing but from my trips to farmers yards all over the country one thing stands out in every bin I have seen. There is no way to physically get into the bin to clean it out properly and safely. This leads to the eventual scenario where over the years the bin is not cleaned out properly at all.

Condensation builds up on any surface, witness the windows on your house where drops of water can form on the inside of the glass. This condensation affects outside Animal feed bins in the same way by forming little droplets of water inside the bin. Obviously this effect is very small but over the years I have seen this to build up in farm bins that are not cleaned out leading to feed sticking to the side of the bin for months or years on end. This can lead to moulds or mycotoxins building up in the bin which has knock on effects for the next feed you put into the bin. Mycotoxins are micro organisms that can have a poisonous effect on your cattle so anything we can do to minimise their presence will have a beneficial effect on all our profits at the end of the year.

It is a difficult thing to do with most bins but it is well worth while making the effort at least to look into the bin with a flashlight from whatever inspection hatch you have to check your bin. When i asked a few customers many said they had never actually seen the inside of their bin!

In our animal feed mills we empty our bins totally and inspect them from inside at the very least every 3 months. In practice we do it a lot more regularly than that. The Department of Agriculture inspectors call a few times a year at random to inspect our premises and as part of that our bin empty records, along with physically checking the bins themselves to ensure that they are clean and free from any potential condensation problems.

It might be an idea to put it in your plan to have a good look at your bin the next time it is empty.