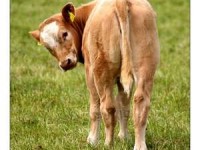 For a cow to have a long and productive life, good health during the first few weeks on the farm are essential.

In recent years there has been much research to show that animals that remain disease-free grow faster and reach target weights for breeding and calving down earlier.

These disease-free animals also produce more milk in their first and subsequent lactations and they are more likely to stay in the herd for longer.

The generally accepted target weight for breeding heifers is 60pc of their adult weight, which for a Friesian heifer will be approximately 330kg at 15 months of age.

If a calf is born weighing 40kg, this means that on average she must have a daily live weight gain of nearly 650g per day.

In seasonal calving herds, a later born calf will have to grow faster than this, as it is important for heifers to calve down as a group at the beginning of the calving season.

Research has shown that heifers that calve down earlier, and have a younger age of first calving, result in a quicker return on investment.

Even when meeting the recommended targets, the farmer doesn’t get any return for his investment until midway through the animal’s second lactation.

So what are the factors that affect growth in young calves?

Calf nutrition, calf health and genetics all play a role and in this article, we examine the common nutrition and health factors that can affect calf growth.