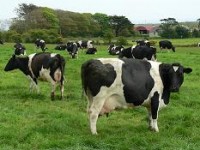 The early signs of Calving 2013 have again highlighted many issues with cows at calving. Calving has barely started but some herds are experiencing significant problems. Cows are calving down both thin and worst of all weak.

At the moment knackeries are reporting a huge increase in business. One such company told us that in 2012 they were doing maybe 5 to 6 loads a week, in 2013 so far they are flat out doing 15 to 20 loads a week. It is a frightening scenario.

Here at John O’Connell Feeds we want our customers to be successful first and foremost. Our goal is to help our customers maximise their profits through animal nutrition and performance.

We are not trying to put a hard sell on feed rather we are trying to highlight the huge energy gap in the diet of a cow on silage in 2013 versus a cow on silage in years where they have had better quality silage. A few kilos of feed to a cow before calving will not make or break our business but we believe it could be a huge benefit to our customers.

While many farmers fed cows in the early stages of the dry cow period there is a reluctance to feed as they get closer to calving. Some farmers have had to buy expensive silage from a variety of sources so testing silage is difficult. In some instances silage quality is highly overestimated.

This lower quality silage has a vastly lower nutritional value and energy value than silage that was fed in 2012, so feeding at 2012 levels with poor silage is just not working, leading to thin cows and worst of all weak cows at calving.

Energy demand increases significantly in the 7th to 9th month of pregnancy by 30% and at the same time the cow’s capacity to intake is reduced. As an animal already under pressure throw in a hand grenade of poor quality silage and it is playing havoc with cow health leading to high mortality rates and serious problems at calving.

The consequences of not feeding in 2013

The general advice for farmers is to supplement silage for all cows on less than ideal silage quality.

All years being equal most farmers would get away with feeding minimal amounts of feed pre calving but learning from previous experiences in poor fodder years we would urge you to consider bridging the energy gap for your cows at calving.

Call us for help and more details.