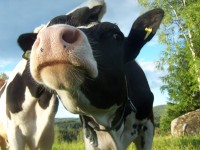 Here at Crecora Mills we are getting lots of questions on farms as to what dairy farmers options are at the moment.

Lets look at an average Case study of a Herd of 100 cows.

We will assume that calving will be starting in early January and running on into late March.

Option 1. Dry off all cows on November 1st

Option 2 Dry off all cows in December 1st

Option 3 Dry off the 60 cows on December 1st that will calve early and keep 40 late calving cows milking till Jan.

Option 1 Dry off all cows on November 1st.

“Sure there is no point milking on at this level is there?”

“I’ve never done it before because I was always over quota”.

Option 2 Dry off all cows on December 1st.

” I need a break from Milking”

“Sure it wont pay me to keep milking now on small volumes.”

Assuming cows milking only 14 litres at high milk solids probably 30 cent per litre. 100 cows will milk €12,600 worth of milk. Assuming a feed level of high quality Crecora Mills feed at 5kg per cow for the month of November at €250 euro per ton( or less depending on what feed you select from Crecora Mills) means it will cost €3,750 in feed.

That’s a Minimum profit in 30 days of €8,850 over farmer who dried off in November. (He could well afford to get a relief milker in for November if he needed a break)

These 40 cows should milk 13 litres at high milk solids (30 cent/litre) if they have been looked after all year. 40 cows in December will produce €4,836 worth of milk on 6.2 kgs of Crecora Mills feed at 5kgs feeding rate. That’s a maximum feed cost of €1550 (assuming €250 euro per ton depending on which of our feeds are used it may be considerably less) Profit from those 40 cows alone for December will be €3286 euro. The farmer could surely get a relief milker in for December to milk 40 cows if he/she needed a break from milking.

Interestingly the profit difference between the Farmer that dries off in November and the farmer that the 40 cows going till January is €12,136 for 2 months work. I know i would milk cows twice a day for that kind of money! The other often forgotten but arguably more important advantages are that the farmer can control and manage body condition better in the parlour. Less fat cows has a hugely positive effect on:

All massively crucial milestones in cow nutrition and health.

Remember to only “Mix with the Best” and use Crecora Mills Feed.